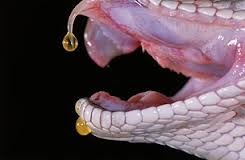 At the mention of snakes many people envision a mindless killing machine hell bent on biting them for the mere sake of it! This couldn’t be further from the truth. Snakes are incredibly secretive animals that avoid humans at all costs and will only bite when they are threatened and feel they have no other means of escape. The bloke at the pub will tell you differently of course, but as someone who has caught literally hundreds of snakes from all around Australia I can unequivocally state that I have never been ‘attacked’ by an unprovoked snake. People do get bitten however, most commonly while trying to catch or kill a snake or by accidentally standing on one.

However, snake venom is a physiologically expensive substance to produce and a given snake will not want to waste it unnecessarily on something it doesn’t plan to eat. This is lucky for us as sometimes a snake will ‘dry bite’ without envenomating as a warning to stay away. So, the million dollar question is – what proportion of venomous snake bites will result in a dry bite?

Luckily for us the the women’s and children’s hospital and Adelaide University conducted a study into just this! While not looking at all Australian snakes they did include the two most commonly encountered large dangerously venomous snakes found in Brisbane, the Red-bellied Black snake (Pseudechis porphyriacus) and the Eastern Brown snake (Pseudonaja textilis).

Below are there findings for these snakes plus the Common Death Adder (Acanthopsis antarcticus) a less commonly found Brisbane resident.

– Eastern Brown Snake – Rate of envenomation is between 20 – 40 percent.

– Red-bellied Black Snake – Rate of envenomation is between 40 – 60 percent.

– Common Death Adder – Rate of envenomation is between 40 – 60 percent.

These findings show that a snake bite will often not result in envenomation. Combine this with the low number of snake bites in Australia per year and its clear there are far more pressing risks to our personal safety.

If you do your best to stay out of a snakes way I guarantee it will do everything in its power to give you the same courtesy.