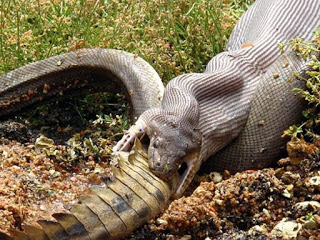 General Snake Advice
How do snakes feed?
November 24, 2015 By elliot@fffma.com.au
0

Being limbless offers snakes a number of advantages but ease of feeding is not one of them! A snakes body plan just doesn’t equip them with the necessary tools to effectively tear prey items into manageable sized pieces. They are however amazingly adapted for the consumption of whole, large prey items that basic physics should exclude them from! So, how do they do it?

This varies depending on the species of snake with land snakes following one of two (or both) general tactics, envenomation or constriction. Pythons fall into the constriction category – generally striking then immediately coiling themselves around the prey item. Constrictors will then slowly tighten their coils, eventually crushing the unfortunate animal to death. Australian venomous land snakes (elapids) subdue their prey with venom. Depending on the toxins in a given venom this is done by attacking some/or a combination of the cells, organs, cardiovascular and nervous systems.

Contrary to popular belief a snake does not dislocate its jaw when swallowing large prey. Firstly the lower jaw of a snake is not fused but rather in two pieces connected at the front by stretchy tendons. This allows the bottom jaw to open much like a swing bridge. Secondly the top and bottom jaws are connected by the quadrate bone which is not rigidly attached and can pivot, allowing vertical and horizontal rotation of the jaw. Once the snake has widened its jaw sufficiently to accommodate its prey it then ‘walks’ the right and left sides of its lower jaw up the prey item. Once the prey item passes the mouth the snakes skin and body will stretch (and sometimes tear) to accommodate the meal. Finally the esophagus muscles of the snake constrict, pushing the meal towards the stomach where the long process of digestion takes place.