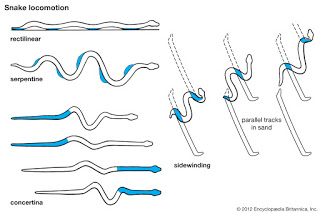 Snake Biology
How do snakes move?
November 24, 2015 By elliot@fffma.com.au
0
At first glance snakes look rather disadvantaged in the locomotion department, laking limbs or other appendages with which to propel their cylindrical bodies. That said, many snakes are fast movers, efficient climbers, excellent swimmers, adept burrowers and some can even fly! kind of. So how do they do it?

Serpentine movement is what most people think of when they picture a snake ‘slithering’ and is one of the most commonly employed styles. It involves the contracting of muscles from head through to tail and the flinging of the body from side to side creating the curvy s-shape movement people associate with snakes. This method works well in undulating, rough terrain that allows the snake to grip against and push off things creating forward propulsion but fails on smooth surfaces. Serpentine movement also works efficiently in water and is used by both marine and aquatic snakes including many boids that on land would rarely employ it.

Rectilinear movement involves the snake ‘walking’ its body forward by alternately lifting its rectangular belly scales up and forward with the body sliding over them resulting in slow straight progression. This style of movement is more common in larger snakes including many Australian pythons.

This style involves anchoring the head and tail to the substrate and ‘throwing’ the mid-body forward and following (in a slingshot fashion) with the head and tail. The snake is using the anchored body sections to allow the mid-body a platform to thrust off from. Sidewinding is effective on smooth or slippery surfaces and is used by a number of desert dwelling species to move through sand and over dunes.

Concertina progression involves anchoring the head, pulling the body up into a curl, anchoring the tail and pushing the head and fore-body forwards. Although slow, concertina movement allows a snake to climb things or move through tight spaces effectively.

A rather unseemly form of movement sometimes employed on slippery surfaces lacking decent grip that involves the snake pointing its head in the direction of travel and wriggling and jerking the body resulting in a slow ‘slide’.