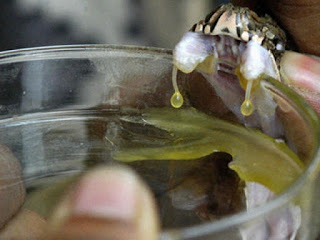 Below I outline some for your viewing pleasure;

– The venom of the infamous Australian elapids the Eastern Brown snake and the Coastal Taipan is added to blood samples of critically ill hospital patients to fast track blood tests. The coagulant properties cause up to a four fold increase in the speed of a given test! Toxins in snake venom have also been used to treat blood disorders, Alzheimer’s, stroke, heart attack and even Parkinson’s!

– A protein found in a number of spider venoms shows promise as a treatment for muscular dystrophy. The study showed that the protein helped stop muscle breakdown and although not a cure, could significantly slow the disease.

– A number of spider and scorpion venoms have agents that cause priapism.. or prolonged erections to put it more bluntly ;p

– In a lab situation, scorpion venom was used to create a ‘tumor paint’ that could bind to cancer cells, in this case specifically brain cancer cells illuminating them for easy identification.

Amazing as these medical marvels of venom are they are by no means an exhaustive list… Comment below with any that I have missed!