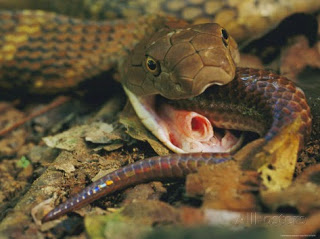 Often snakes will feed on very large prey items many times bigger and wider than their heads and bodies. To facilitate this a snake’s bottom jaw is in two parts allowing it to effectively “walk” its jaw along the body of its prey until it has completely swallowed its meal. As impressive as this method of feeding is it can take a while for a snake to get the food item down during which time the snakes mouth and throat can be completely blocked! So, how does it breathe?

Most snakes’ breathe with just a single large elongated lung with the other being greatly reduced in size or absent. This lung is connected to the trachea or windpipe, which is reinforced with cartilaginous rings giving it the required rigidity to help maintain its shape during breathing and feeding. The trachea terminates at the glottis an entry hole in the snake’s mouth allowing the snake to take oxygen and breath.

When the snake begins to consume a food item it can push the trachea out of its mouth positioning it out of the way under its prey (check out the pic at the top of the page!). The trachea remains outside of the mouth during the entire feeding process and its cartilaginous reinforcement allows the snake to continue breathing throughout!

I hope this has helped to answer your questions regarding snake breathing during feeding!