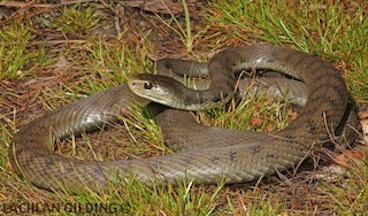 The rough-scaled snake is a less common visitor to suburban Brisbane or Gold Coast backyards and a much lesser known snake for this reason. This is due mainly to the fact that rough-scaled snakes are infrequently found in disturbed areas away from their preferred habitats – rainforest, wet sclerophyll forest and open forest or scrubland associated with water systems. For us in SE Queensland this means they are predominantly found in our surrounding undisturbed hinterland including Mt Nebo, Mt Glorious and Mt Tambourine.

Responsible for at least one human death and many serious bites rough-scale’s are dangerously venomous and notoriously skittish and should be treated with caution. Their venom contains a mixture of potent parasynaptic and postsynaptic neurotoxins (can cause paralysis and respiratory failure), procoagulants (interfere with blood clotting) and myotoxins (cause muscle damage and can lead to renal failure). DNA evidence shows rough-scaled snakes are closely related to the infamous tiger snake and the effects of their venom are also closely matched.

Rough scaled snakes are brown to olive in colour with irregular darker banding or blotching with the belly an olive-cream often with a slight green tinge. They get their name from the raised “keel” present on their mid-body scales. The colouration and keeled scales of the rough-scaled snake superficially resemble that of the harmless keelback snake reinforcing why unless highly competent in snake identification we should treat all snakes as if they are dangerous.

Rough-scaled snakes are generally nocturnal being most active on warm, humid or wet summer nights when frogs one of its main food sources are abundant. When the weather is cooler however it is not uncommon to see them out basking during the heat of the day. Despite feeding mainly on frogs and small mammals rough-scaled snakes are not picky and will also take lizards and birds if given the chance.

As able and willing climbers, often found sheltering in hollows or epiphytes in tall trees, rough-scaled snakes are unique in the Australian elapid world. This is not to say other large elapids do not climb when the need arises however with Brisbane snake catchers rescuing a number of elapid species (including eastern brown snakes) from trees after the 2011 Queensland floods. Despite their ability as climbers and arboreal hunters the rough-scaled snake is still considered primarily a terrestrial snake.

Mating in rough-scaled snakes occurs between mid-spring and late summer with females giving birth to between 5-18 live young from late summer. Like with all Australian snakes there is no parental investment in hatchlings with the young snakes forced to fend for themselves.