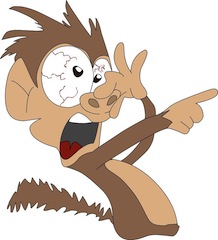 One of the most commonly encountered snakes in suburban Brisbane is the common tree snake (Dendrelaphis punctulata). This inoffensive, non-venomous snake is completely harmless to humans and for many is a welcome visitor to their backyards. Being harmless to humans however doesn’t mean it is completely without defences with the common tree snake (along with many other venomous and non-venomous species) being capable of emitting a horrible odour designed to deter predators or overly zealous snake enthusiasts and is responsible for many an unhappy snake catcher.

The smell in question is omitted by a pair of cloacal scent glands (that are present in all snakes) located below the cloaca near the base of the tail. These glands are generally larger in females and as a result female snakes within a species will often have a stronger scent. When threatened the snake will secrete a thick opaque fluid along with traces of faeces and uric acid – covering both itself and its attacker in an attempt to make itself unpalatable and providing a means of escape.

Despite its usefulness for predator deterrence cloacal scent glands aren’t used exclusively for defence but also plays a lead role in mate selection and the marking of home ranges.

The secreted fluid differs between snakes but is generally very rich in lipids often containing mucoprotiens and mucopolysaccharides. As anyone who has handled a common tree snake will know, this scent is very hard to get rid of and will often withstand scrubbing with soap or remain on clothes even after a trip through the washing machine.

Despite this obvious negative non-venomous snakes such as the common tree snake can be helpful to have around by keeping pest species such as the Asian house gecko (Hemidactylus frenatus) at bay and if left alone should remain relatively stink free!