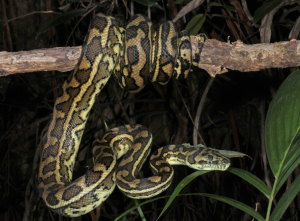 SE Queensland has been incredibly cold of late – more closely resembling my native Wellington than the sunshine state capital!

Despite the continued drop in temperature we are continuing to receive regular call outs to all Brisbane suburbs. The cold weather means you can almost set your clock to when the snakes will be active with the vast majority of calls being mid to late afternoon, the hottest part of the day. Calls outside this peak time have been mostly the result of residents moving objects that have sat around their properties for a while and disturbing a snake hidden underneath. This has made our job easier as the snakes are generally disinclined to move about too much meaning they are easy to locate when we arrive.

The types of snakes moved this month have been overwhelmingly dominated by just three species – carpet pythons, common tree snakes and keelbacks. All of these snakes are non-venomous and can often be quite helpful keeping pest species at bay.

Last month I received a number of emails from people proudly asking me to identify snakes that they had killed. Snakes are important parts of our ecosystems and removing them can have undesirable results. Further, snakes are protected animals and it is highly illegal to kill or injure them. Also the majority of snakebites in Australia are the result of people trying to catch or kill a snake – if you leave them alone they will show you the same courtesy. If a snake is hanging around or becoming problematic calling a professional permitted snake catcher is the best remedy.

Now more than ever it is very important you keep your yard tidy and free of things that a snake could hide under or in!