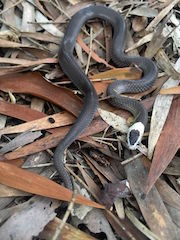 The upward trend in snake sightings seen in September continued throughout October with even a few late night visitors of the python variety starting to pop up on the warmer nights.

October was typified by a shift in the snake species being sighted with a not insignificant number of Eastern Brown Snakes and Red-bellied Black Snakes turning up in some of the less urbanised suburbs. Carpet pythons and common tree snakes followed the script with a massive presence throughout the month also. Other snake species that made cameo appearances during October were; white-crowned snakes, golden-crowned snakes, small-eyed snakes and keelbacks.

I have had numerous identification photos sent to me along with a number of call outs involving two snakes together. This is not uncommon this time of year with a number of species breeding and is not – as is commonly feared – a sign you are being overrun by snakes but merely a regular seasonal occurrence.

Moving into November snake sightings are likely to increase Brisbane wide. Remember, if you see a snake to leave it alone as most bites are the result of trying to catch or otherwise interfere with the snake. If you require the snake removed it is always the safest option to call in a professional.

Have a great November everybody!